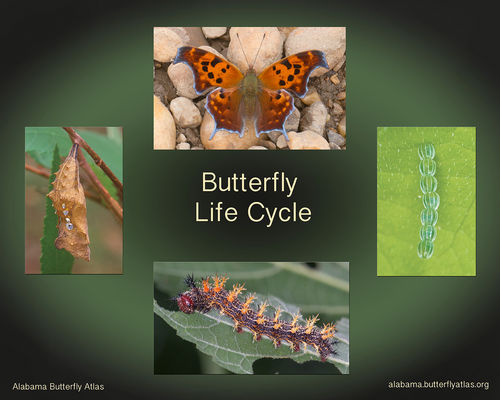 No focus on butterflies is complete without at least a cursory glance at their life cycle. A basic understanding of this process is foundational for all the species accounts that are included on this website. Butterflies undergo complete metamorphosis. Beginning as an egg, they pass through a distinct larval stage, then enter into a seemingly inactive state as a pupa, and finally emerge as an adult—in butterfly jargon: egg, caterpillar, chrysalis, butterfly. Each four-stage cycle comprises one generation. Some species are univoltine, completing only a single generation each year. Others are multivoltine and complete two or more full cycles annually.

Fertilized eggs contain the basic components of life. The female lays her tiny eggs on specific plant species (host plant). Butterfly eggs may be shaped like bullets, discs, turbans, or spheres. They range in color from pearly white to bark brown and rusty red. Many are green, but some are bright orange. The egg stage may run its course in as little as four days; however,in some species, it may last as long as ten months. Shortly before hatching (eclosion), most eggs appear to darken as growinglarvae becomes visible through the egg’s wall.

Once free of their shells, many larvae make meals of them. So many meals follow that caterpillars areoften called eating machines, and they must periodically shed their skins (or cuticles) in order to accommodate their increasing mass. Whenever this saturation point is reached, larvae stop feeding and become immobile. Since the hard, inflexible head capsule is particularly limiting, a new head grows behind the old one as a new skin forms under the current cuticle. When the timing is right, the old skin splits at the head, and the caterpillar writhes, wiggles, and finally walks out of it. For a few hours, the new cuticle is very soft, allowing the caterpillar to expand to a much larger size before it hardens.

The body of the caterpillar between molts is called an instar. Most species have five instars, although many lycaenids have only four, greater fritillaries have six, and metalmarks have up to nine. Near the end of the final instar, the caterpillar prepares for the next major developmental stage. Sometimes called the pre-pupal phase, at this point, feeding ends, the gut is voided, and in some species, the larva completely changes colors.

It also begins to wander in a search for the perfect pupation site—an important choice because chrysalides are immobile and unable to flee from danger. Once the selection is made, just as it does when it molts between instars, the caterpillar’s cuticle splits.

When the larva is fully grown, it seeks a safe place in which it will form a pupa. Like all other life-cycle forms, chrysalides are diverse. Although some dangle and others lay prostrate, most are attached to a substrate. Many are hooked by their rear legs into a pad of silk, and some are also supported by a strand of silk that resembles a waist belt.

After a short period of rest, the larva molts (sheds its skin) for the last time as it metamorphoses into the pupa, which is encased within a hard covering (or chrysalis). Unlike many common moths, butterflies do not construct a protective cocoon. The pupal skin is usually smooth and sometimes transparent, but often provided with either camouflaging colors to prevent its discovery by would-be-predators or with bright warning coloration to alert predators that they are either distasteful, toxic, or equipped with stinging spines. Inside the pupa, amazing changes occur. The old caterpillar tissues break down and reorganize to form the adult butterfly body although it is still encased in the old pupal skin. For some species, the pupal phase lasts only a week, but for others, ten months pass before the final transformation occurs. When development is almost complete, wings become visible through the semitransparent pupal covering.

If environmental conditions are favorable, the chrysalis will split open and the adult butterfly will emerge.

When the chrysalis splits, the adult butterfly emerges. Often the butterfly remains attached to the old pupal covering for an hour or two to expand its wings so that they may dry and harden in order to prepare for its first flight. Once the adult butterfly emerges from the pupal skin, it will grow no larger. Even very tiny butterflies are full grown adults. Relative to the caterpillar stage, which moves about very little and for short distances only, the adult stage is the most mobile, and in some species, the most dispersive stage in the buttefly's life cycle. Unlike the caterpillar, which requires a specific host plant on which to feed, the adult butterfly’s feeding habits tend to be less specific, although some patterns do exist. While most butterflies feed on nectar from flowers, others may feed on honeydews, froghopper secretions, rotting fruit, sweat, urine, dry or wet dung or even rotting meat. Most adult butterflies live about two to four weeks if they are lucky enough to escape predators such as lizards, birds, dragonflies and spiders.

However, there are many variations in the lifespan of adult butterflies. Some butterflies such as Mourning Cloaks may live up to eight months, spending winter months in a slowed-down state called diapause. One generation of adult Monarchs engages in a fall migration, lives through the entire winter in Mexico and even begins the journey northward when spring arrives!

The basic componants are the same, but each butterfly species has its own unique life cycle details. Explore these within the individual species accounts on this website.