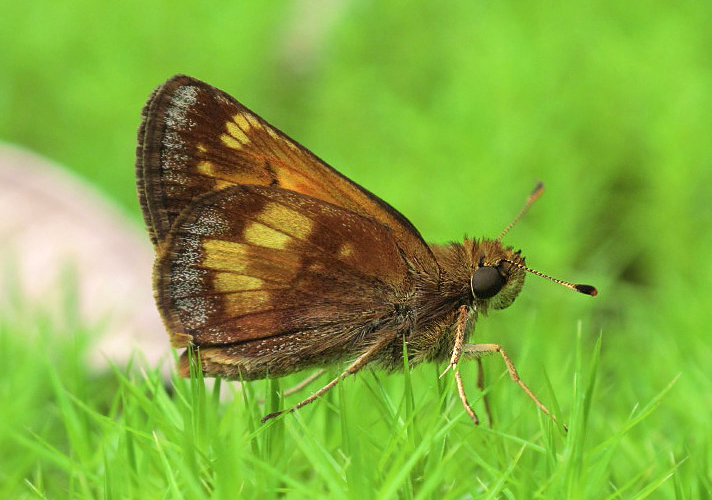 Butterfly: Wingspan: 1 - 1½ inches (2.9 - 3.9 cm). The underside of the hindwing has (crossing its median wing area) rectangles of golden yellow outlined with rusty brown, and with a rusty brown wing border and wing base.  The wing borders are dusted with whitish-gray to violet. The uppersides of the wings are golden orange with irregular brown borders.  There is a black cell-end bar on the male forewing. Two distinct color forms are seen in Hobomok Skipper females. The lighter one resembles the male, while the darker form (called “Pocahontas”) superficially resembles females of the Zabulon Skipper.

Caterpillar: The caterpillar is pale brown to greenish, sometimes with a pinkish hue. The body is covered with fine short hairs, giving it a velvety appearance.

Chrysalis: The chrysalis is dirty white, becoming pink toward the thorax, and is covered with a white, powdery down. Overwintering is known to take place in both the caterpillar and chrysalis stage. The caterpillars construct individual tubular leaf shelters on the host plant within which they overwinter and complete development in the upcoming spring

Males are very territorial. They sit on sunlit leaves, five to six feet above the ground, and fly out to aggressively encounter any butterflies that happen to pass by.

The Hobomok Skipper is rather uncommon in Alabama, being found mostly in the northeastern part of the state. It has not been reported from the southern one-half of Alabama. Elsewhere, it  is distributed from central Alberta across southern Canada to Nova Scotia, south through the New England states to northwest Georgia, west to Oklahoma, and north to eastern Montana. A disjunct population occurs from New Mexico into southcentral Colorado. 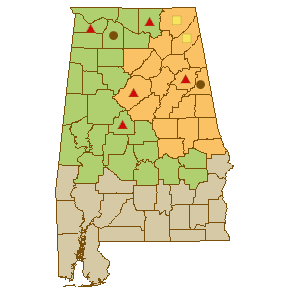 In Alabama, the host plants for the Hobomok Skipper have not yet been documented.

In nearby states, the larvae are reported to feed most frequently on panic grasses (Panicum spp.) and bluegrasses (Poa spp.).

The Hobomok Skipper nectars from a variety of flowers.