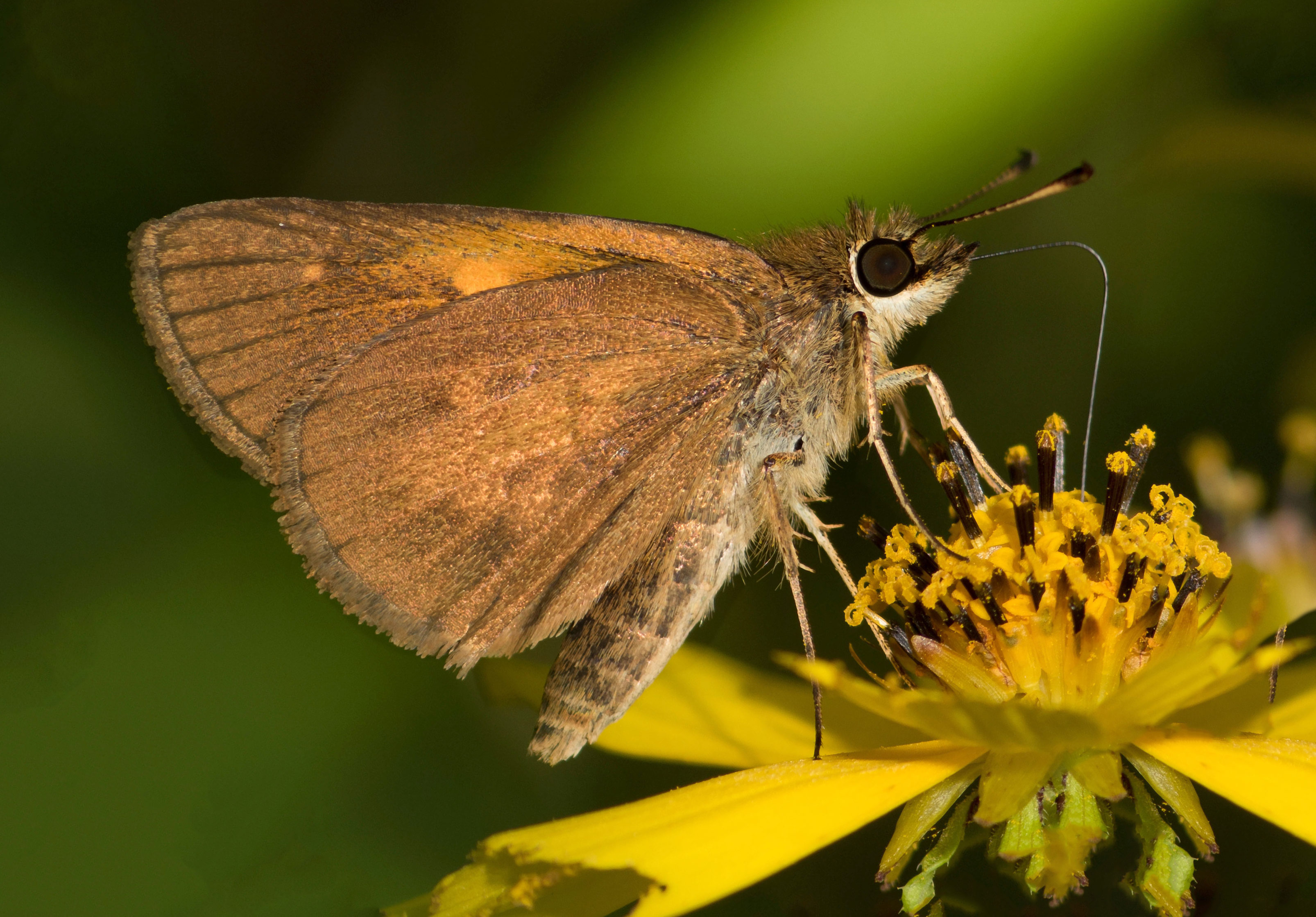 Butterfly:Wingspan: 1¼ - 2¼ inches (3.2 - 5.7 cm). This skipper is larger than most grass skippers, with broad, rounded wings. Hindwing undersides are dull orange-brown with discrete rectangular patches of orange. One long orange patch on this wing extends from the wing base and is crossed by another short orange patch, giving the appearance of a cross. On the upper (dorsal) surface, male forewings are dark with segmented orange patches.  On the female dorsal forewing, the patches are smaller and are creamy white rather than orange.

Egg: Pale white eggs are laid singly, typically on the lower half of the host plant blade.

Caterpillar: Pale greenish body. Head is light brown with two black spots and a black line. Caterpillars hide in leaf sheaths at the base of host grasses.  Partially-grown larvae overwinter. Devlopment is completed in the spring when larvae eat newly emerging cutgrass blades.

Chrysalis: Pupation is occurs in the leaf shelter near the base of the plant.  The chrysalis is attached loosely at the bottom and points head up.

Male Broad-wingeds flutter through large stands of host plants as they search for females. Their flight is somewhat slow and bouncy as they fly below the top of the vegetation and dip low to flush potential mates. They periodically stop to sit with open wings, often perching on pieces of dead grass.  Females tend to remain low in host grasses when not nectaring or ovipositing.  Both sexes nectar at a variety of wetland plants including Buttonbush and Water Willow. Males may wander some distance to find nectar, sometimes into nearby gardens.

Caterpillars do not construct typical skipper leaf shelters; they make use of a natural "shelter" formed by a recess between the sheath and stem of the host grass. They hide deep within this channel, above the level of the water, and feed on the upper half of the grass blades. Pupation occurs within the recesses at the base of the plant. Partially grown caterpillars overwinter. They resume eating and complete development in the spring. 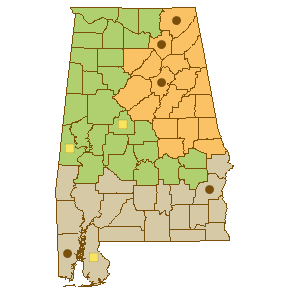 In Alabama, Broad-winged Skippers are found in coastal salt and brackish marshes as well as inland freshwater marshes and lake edges. Look for them where large stands of their host plants grow in shallow water.

In other states, Broad-winged Skippers have increaed their range because they have adapted to the non-native Giant Reed (Phragmites communis) as a caterpillar host.  Wild Rice (Zizantia aquatica), Big Cordgrass (Spartina cynosuroides), as well as Marsh Millet/Giant Cutgrass (Zizantopsis miliacea) are also reported as hosts. A Broad-winged Skipper subspecies that occurs in the Great Lakes region has been documented using Lakebank Sedge (Carex lacustrus).

Marsh Millet/Giant Cutgrass has been documented as a host plant in Alabama, and Broad-winged Skippers should be searched for wherever large stands of this perennial grass occur. Other broad-leaved wetland grasses, particularly the closely related Wild Rice, may also be used.

Broad-winged Skippers sometimes wander into gardens that are near their wetland habitats. Provide a variety of garden-worthy, nectar-rich flowers to attract them and many other butterfly species. These include: Butterfly Milkweed and other milkweeds; Purple Coneflower and other coneflowers; black eyed susans; phloxes; mountain mints; Common Buttonbush; Joe Pye weeds; gayfeathers/blazing stars; Mistflower; ironweeds; asters; and goldenrods.