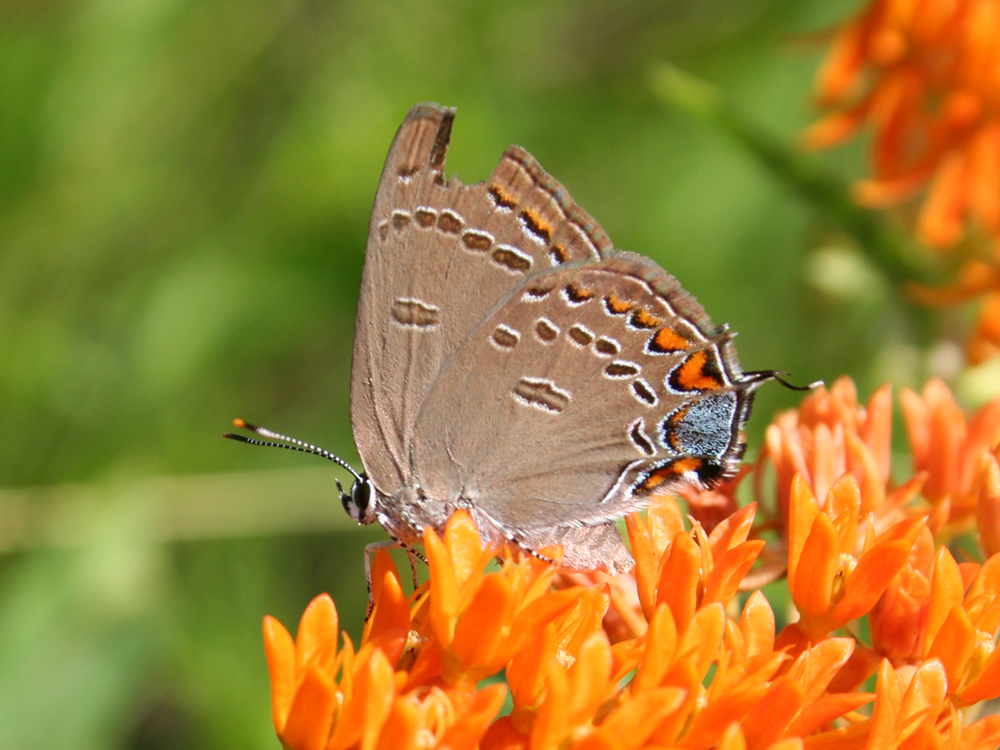 Butterfly: Wingspan: 1 - 1½ inches (3 - 3.8 cm).  The underside of the hindwing is pale brown with a postmedian band of dark brown oval spots rather than dashes.  The blue tail-spot is typically not topped with orange, although sometimes there may be some red scales. There is typically one tail on each hindwing; sometimes there is an additional very short tail.

ID Tip: A band of white-ringed oval black spots on closed wing surface separates this from other hairstreaks. There is no orange or very slight orange on the blue spot near the tail.

Egg: Creamy pink, flattened disc laid singly or in very small groups at the base of saplings near specific ant colonies. Eggs are the overwintering stage.

Caterpillar: Dark brown with dark band and a series of pale dashes.  Late stage caterpillars eat at night and are tended by ants.  As daylight approaches, the ants herd caterpillars into their underground chambers where they spend the daylight hours. The ants receive sweet liquid from the caterpillars, which is produced by a special tentacle-shaped gland.

Edwards' Hairstreaks occur in highly localized colonies.  They are known from only 2 records in Alabama. Their close resemblance to other hairstreaks in their genus (satyrium) and their short flight time makes them easy to overlook and misidentify. During late spring/early summer, small hairstreaks should be carefully examined to determine their identity--particularly near Alabama's eastern border where Edwards' have occurred. 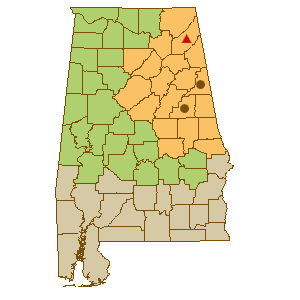 Thickets and scrubs, roadsides, utility easements, trails that are located in or near oak woodlands

No host plant has yet been verified in Alabama.

If Edwards' Hairstreaks are in the area, they will be attracted to flowering plants like Butterfly Milkweed (Asclepias tuberosa) and Common New Jersey Tea (Ceonanthus americanus), nectar-rich plants that bloom during the butterflies' flight period.

Including oaks in the landscape is beneficial to many butterfly species, including Edwards' Hairstreaks.