Butterfly: Wingspan: 1¾ - 2¼ inches (4.8 - 5.7 cm). Wings are medium brown in color. Ventral forewing has four eyespots; hindwing has six or seven. White-dotted "pupils" are ringed with yellow, brown, and white, creating a bull's-eye effect. Eyespots vary in size. The upper (dorsal) surface has four less defined spots on the hindwing.  The forewing may or may not contain small, indistinct spots.

ID TIp: Ventral wings contain eyespots with "pupils" that are ringed with yellow, brown, and white, creating a bull's-eye effect.

Egg: Greenish white.  Laid singly on or near host plant.

Appalachian Browns live among the sedgy edges of swamps, creek banks, and other wetland areas.  They are virtually always encountered under a shady, closed canopy and within sight of water. This particular niche has only recently been understood, because for many years these butterflies were considered part of another species known as Eyed Browns. In 1947, renowned University of Alabama professor, Ralph L. Chermock, recognized that within this group, a separate, more southern form existed. Full species status was awarded in the 1970s, and the name "Appalachian Brown" was adopted.

These non-colonial butterflies tend to scatter within their territory.  Only a few individuals are typically encountered  at any one time.  Their nondescript color palette serves them well in their shady haunts. Even though they typically perch on green foliage, they are cryptic and camouflaged among surrounding tree trunks and ground litter.

In Alabama, Appalachian Browns are known from the Mountains/Piedmont and Upper Plains Regions.  However, sightings in Florida indicate that these butterflies should be looked for in the Coastal Region as well. 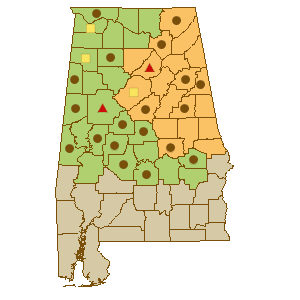 Moist, shaded or semi-shaded woodlands with a good growth of sedges.

Various sedges (Carex spp.) are reported throughout the range.

No host plant has yet been verified in Alabama.