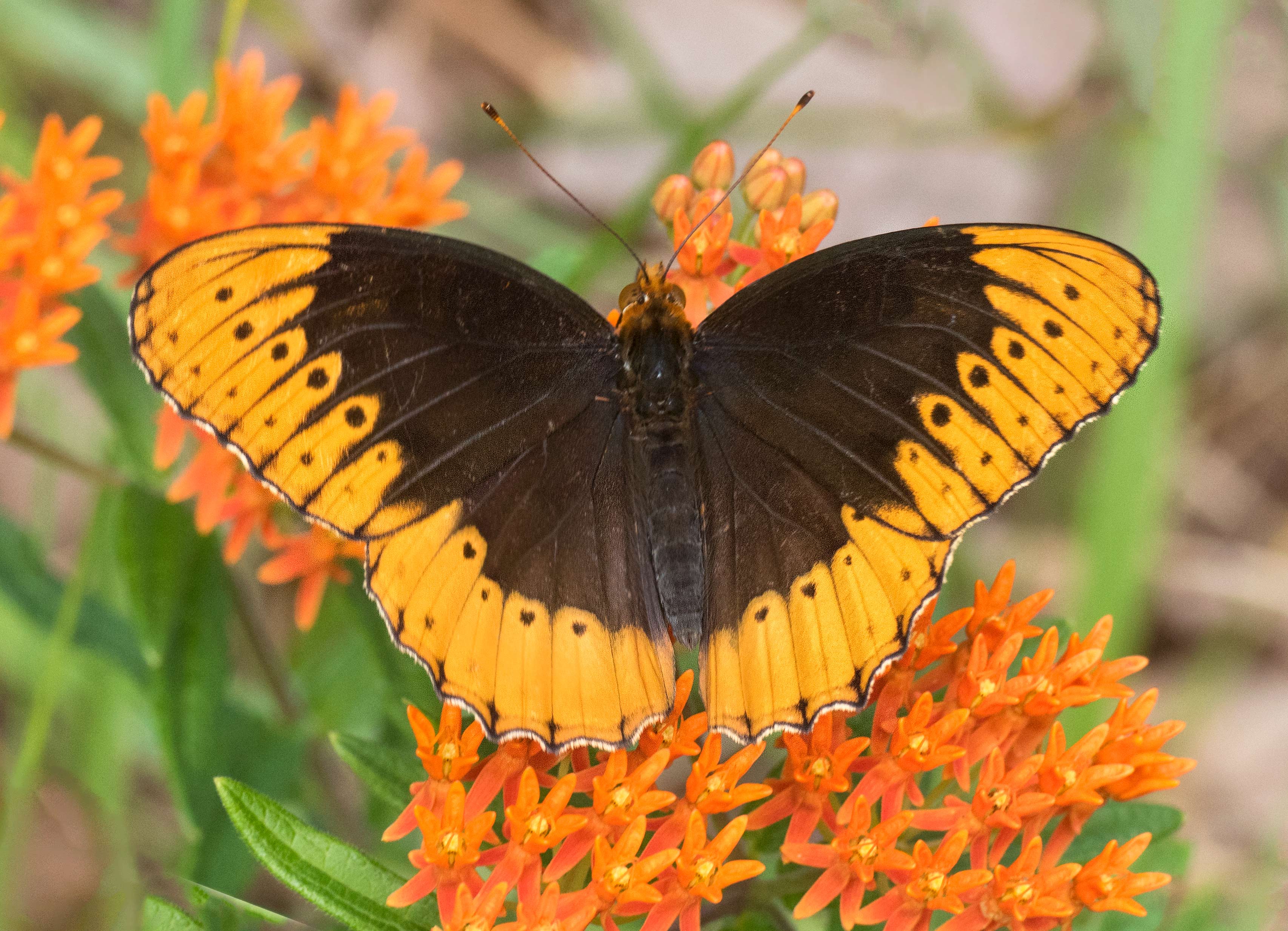 Butterfly: Wingspan: 3½ - 4½ inches (8.7 - 11.3 cm). Large. Upperside of male wings is orange at outer portions and black/brown at base; females are black with blue on outer part of hindwing. Undersides do not have spot pattern.

ID Tip: Male: On open wings, the outer edge has a wide orange band with small rows of dots.  It surrounds the inner three-fifths, which is black/brown.  When closed, hindwings are are two-toned brown and tan.  Forewings resemble the dorsal pattern.  Female: On open wings, inner wings are dark blue/black.  Outer edge has blue and white markings. On closed wings, the hindwing is two-toned blue/brown. Forewings resemble the dorsal pattern.  There is no orange on any wing.

Caterpillar: Mature caterpillars are large and velvety black with several rows of black spines emerging from red/orange bases. First instar caterpillars look like tiny black fuzz balls. Immediately after hatching, they hide in the leaf litter near violets and go into diapause for the winter.  Very early the following year, as violet leaves begin to sprout, the larvae begin to nibble.

Like all Greater Fritillaries, Dianas are single brooded.  Males display the typical fritillary color palette and emerge in early summer, usually several days before their female counterparts.  Females mimic distasteful black-and-blue Pipevine Swallowtails. When they emerge, mating occurs and the male life cycle runs its course.  Females live on in a state of reproductive diapause; during July and August they are seldom seen as they hide in nearby woodlands.  In late summer, females become more active and deposit eggs in the vicinity of violets. First instar caterpillars overwinter, waiting to eat until the following spring when violets flush with new growth.

Typically expected in Alabama’s northeastern mountains, Diana Fritillaries also turn up in unexpected spots and range as far south as Lee County. Dianas' survival requires a complex combination of habitats that must combine open, sunny areas with nearby deciduous forest.  In addition to their violet hosts, a succession of crucial nectar plants such as milkweeds and thistles must also be accessible.  An alarming range-wide decline in Diana populations over the past 50 years makes gathering information about Alabama populations important, particularly since our state is the southern limit of their known range. 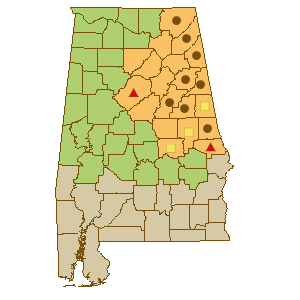 Rich, deciduous woodlands and adjacent sunny, open areas.  However, exact habitat requirements remain a mystery; there appears to be much suitable habitat that does not support populations of Diana Fritillaries.

Violets (Viola spp.) are used throughout its range.

Specific violets have not yet been verified in Alabama.

If Diana Fritillaries are in the area, a combination of violets and their preferred nectar sources may draw them to your landscape.  Milkweeds (Asclepias spp.) and thistles (Cirsium spp.) are favorites.