Butterfly: Wingspan: 1 - 1¼ inches (2.5 - 3.2 cm). The Northern Broken-Dash is a medium-sized, mostly homogeneously brown skipper with a few light beige spots.  The upperside of males have have a divided stigma on the postbasal-postmedian region of the forewing, similar to that of the Southern Broken-Dash (hence the name ”broken dash”).  The male forewing has a pale pinkish spot at the tip of the divided black stigma.  The underside of the male is purplish to reddish brown with a submarginal, curved row of pale beige spots on the hindwing. The upperside of the female is brown with a row of pale orange spots in the outer forewing. Both sexes have the characteristic faint, curved row of pale spots on the hindwing submargin.

Caterpillar: Newly hatched caterpillars are yellow and have a black head. Whenever the larvae enter diapause in the fall, they do so in this early stage.  During the following spring, and after winter hibernation, later stage caterpillars are green with darker green mottling. Faint stripes extend down the dorsum and sides.  The brown head has a dark central stripe and pale lateral stripes on the face.  The dorsal portion of the chrysalis is green with a yellow abdomen, and a brown head region.

Chrysalis: The dorsal portion of the chrysalis is green with a yellow abdomen, and a brown head region.

Males may be seen perching on low shrubs and other vegetation a few feet off the ground. They are most active during the morning hours as they fly about in search of females.

The Northern Broken-Dash has been documented primarily in the upper two-thirds of Alabama. Elsewhere, it occurs from Maine westward across southern Ontario to the Great Lake states, and to eastern North Dakota; thence southward to southeast Texas and eastward along the Gulf Coast states, to central Florida. 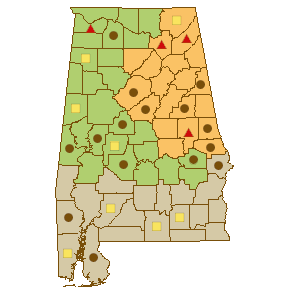 The Northern Broken-Dash is usually found in weedy fields and other open areas near woodlands and wet areas. We have seen it puddling on damp, sunny spots along woodland roads that border swampy areas.

In Alabama, host plants have not yet been documented.

The Northern Broken-Dash nectars from a wide variety of flowers.

If you have a lawn in your landscape, consider letting it be natural.  The diverse assemblage of native and nonnative flowering plants and grasses typically found in naturalized lawns provides nectar and host sources for many small butterflies including the Northern Broken-Dash.