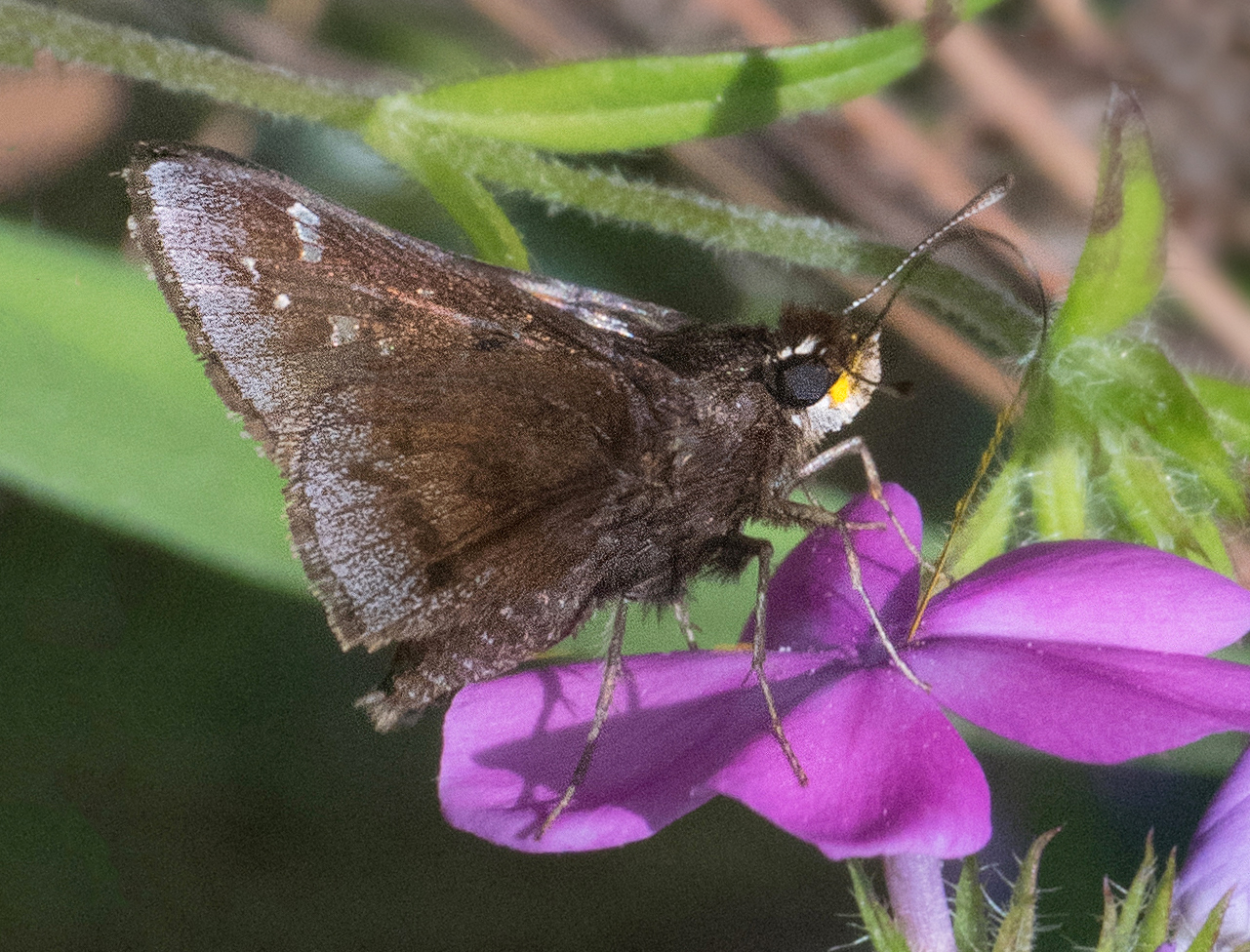 Butterfly: Wingspan: 1¼ - 1½ inches (3.2 - 3.9 cm). A dark skipper with blackish-brown wing coloration.The undersides of the hindwing is "dusted" with tiny white specks. There is a white dot on the underside and near the base of the hindwing. Three white dots are near the tip of the forewing on the underside. A white line is present over the eye, which helps to distinguish it from the similiar-looking Clouded Skipper

Egg: Hemispherical in shape.  When initially deposited, it is pale yellow.  As it ages, the color turns peachy. Laid singly on host grass blades.

Caterpillar: The caterpillar head is dark reddish purple. The body is pale lavender on the back but turns gray behind the head and along the sides. Long cream colored hairs cover the body. Caterpillars eat leaves of their host plant grasses, and live in tents of silked-together leaves.

Chrysalis: Fully-grown caterpillars hibernate and pupate in a sealed nest at the base of the host plant, generally 1-3" off the ground.

Dusted Skippers are almost always found in localized colonies that are near patches of their host grass. Sightings are usually scarce, and according to NatureServe, many colonies probably produce only a few dozen adults per year.  Most populations depend on human management to maintain the necessary open, grassy habitat they require.  Periodic controlled burns are essential in some areas, but the use of airports and power-line cuts are also reported.  Small populations are particularly at risk of disappearing due to habitat loss.

Male Dusted Skippers perch on or close to the ground.  Females fly low through grasses and deposit their eggs on host grass leaves and stems.  These lifestyle traits are one of the reasons that open, grassy areas that often include bare ground or rock are essential.  Dusted Skippers are seldom found where grassy groundcovers are thick.

The Dusted Skipper is distributed from Florida north to central New England, west to southeastern Saaskatchewan and south to northern New Mexico, and east to Georgia. The eastern and western populations probably represent different subspecies. This skipper is largely absent from the coastal plain of the southeastern states. 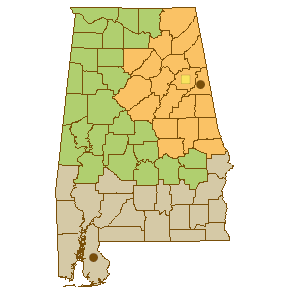 Old fields, airports, woodland clearings, and power-line cuts that are dominated by native grasses are commonly utilized in the eastern U.S. One key habitat feature is a dominance of the host grass, generally with intermixed patches of bare sand or rock.

Habitats include disturbed areas, especially burned-over areas.  Most of the more natural habitats are subject to fire.  If the species persists in that general area, the immatures (usually caterpillars) must either survive the burn or adults must be good colonists.  The Cleburne County sightings were in an area of the Talladega National Forest that is subject to periodic controlled burns.

Dusted Skippers nectar from a variety of flowers.