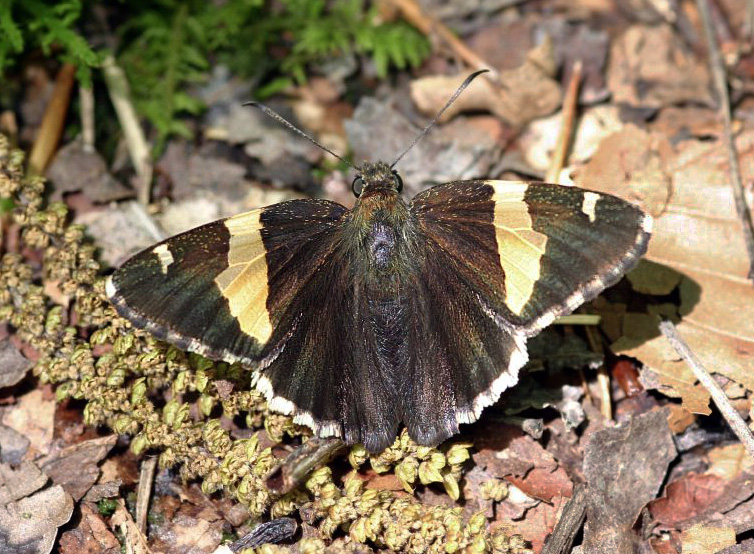 Butterfly: Wingspan: 1½ - 2 inches (3.8 - 5.1 cm). The upperwings have a ground color of dark brown. A wide, golden- yellow band crosses the median portion of the forewing.  A small white patch is present along the costal margin near the forewing apex. Both the fore- and hindwings have a narrow border checkered with yellow and brown. The underwing surface of the forewing is marked similarly as that above except somewhat paler. The hindwing beneath is dark brown and crossed by two to three darker bands. Males have a white ring directly below the antennal clubs.

ID Tip: The Golden Banded-Skipper differs from the similar Silver-spotted Skipper by lacking a white patch on the hindwings.

Egg: Females lay a short string of 2 to 7 reddish eggs on host plant leaves, usually on the underside. Eggs are stacked at angles rather than centered on top of each other.

Caterpillar: The larvae are yellowish-green with numerous tiny yellow dots and a wide yellow lateral stripe. The head is reddish brown and has two round and yellow false eyespots on the lower portion of the facial region. The caterpillars construct a retreat by cutting a rectangular flap along the edge of a leaf and rolling it into a tubular refugium secured by silken strands. These flap shelters have distinct pointed top. The caterpillar stays in the retreat during the daytime, but comes out at night to feed on the leaves.

Chrysalis: The chrysalis is dark brown with a greenish hue; it overwinters and adults emerge in the upcoming spring.

Golden Banded-Skippers have long been considered uncommon throughout their range, but the reason for their scarcity was baffling.  For 80+ years, based on a report from early research, their sole caterpillar host plant was thought to be Hog Peanut (Amphicarpa bracteata), a common vine that often carpets moist woodland floors. It was puzzling that habitat and host plant were abundant, yet the butterfly was usually absent. We now know that the original plant ID was incorrect—the host plant was actually Thicket Bean (Phaseolus polystachios), a vine that sometimes grows in the company of Hog Peanut, but not always.  For almost a century, the incorrect name has been passed from field guide to field guide.  Finally in 2015 the true identity of the host plant was discovered, and Thicket Bean is now considered the primary (possibly sole) caterpillar host for Golden Banded-Skippers in the southeastern U.S.

Thicket Bean inhabits open areas, often on or near slopes with woodlands nearby, and these are the habitats where Golden Banded-Skippers are typically found. Flight is rapid, and adults visit a variety of woodland flowers for nectar.  Males perch on low vegetation to wait for females. They also sip minerals from damp soil.  Females generally lay short strings of eggs on the undersides of Thicket Bean leaves.  These eggs are stacked at angles rather than centered directly on top of each other.  When caterpillars hatch, they quickly cut flaps into the leaf edge, then fold and fasten them to construct a pointed-topped shelter.  These peaked shelters, as well as the off-center egg placement, are distinctive. In Alabama, Golden Banded-Skippers have two, possibly three broods. 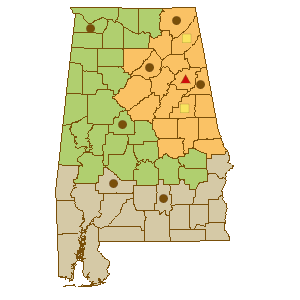 The Golden Banded-Skipper prefers open areas, often near slopes, with woodlands nearby.  It is best seen along dirt roads that run through ravines and well-shaded hillsides. Look for it where populations of Thicket Bean occur.

Due to a decades old plant misidentification, the southeastern population of Golden Banded-Skippers was thought to feed exclusively on Hog Peanut (Amphicarpa bracteata). However, Thicket Bean (Phaseolus polystachios var. polystachios) has now been correctly identified as the host plant.

Thicket Bean/Wild Kidney Bean (Phaseolus polystachios) has been documented as the host plant in Alabama. If you know where Thicket Bean occurs, contact al.butterflyatlas@gmail.com.