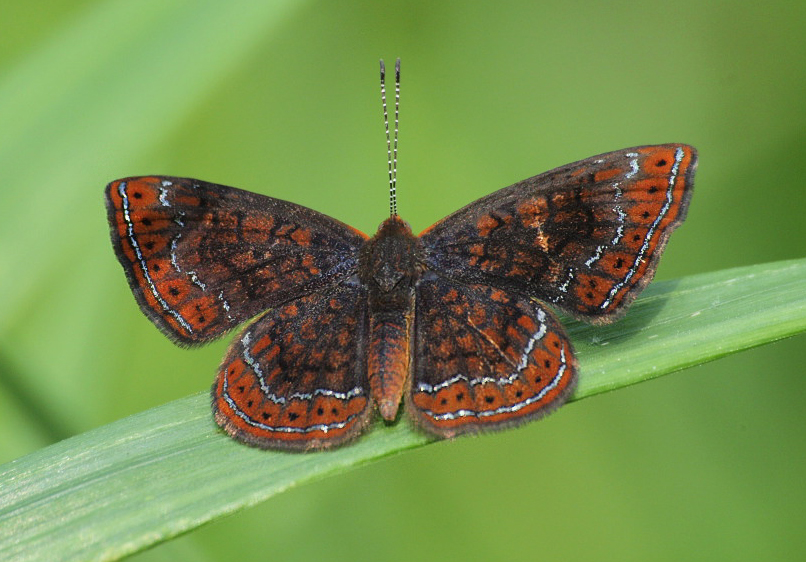 Butterfly:  Wing spann: 1 - 1¼ inches (2.4 - 3 cm). Tiny. The upperside of both sexes is bright red-brown. There are two thin metallic bands along the outer wing edges. Wing fringes are lightly checkered. The thorax and abdomen are dark.  Males have a somewhat pointed forewing while female forewings are more rounded. Females are typically larger.

ID TIp: Thorax and abdomen are dark rather than orange as in Little Metalmark.

Chrysalis: Larval hairs are included in the formation. Often attached to the underside of host plant leaves.

On May 28, 2011, Vitaly Charny discovered that he had photographed a Swamp Metalmark at Cane Creek Canyon Nature Preserve in northwest Alabama, approximately 300 miles from its nearest previously known population! While taking a break at a small clearing, Charny noticed two diminutive orange butterflies swirling above clusters of Daisy Fleabane.  One looked unusually small, so he quickly snapped some shots with his digital camera. The identity of the first butterfly was predictable (a male Pearl Crescent), but the other was a complete surprise. The tiny individual was clearly a metalmark, by all accounts, far out of range. Believing he was looking at a Swamp Metalmark, he sent images to Dr. Paul Opler, who confirmed the ID.

Why was this discovery so surprising? Swamp Metalmarks are typically associated with grass/sedge wetlands in the Upper Midwest, Ohio Valley and Ozark Mountain regions, extending as far south as Kentucky and Arkansas. They are almost never common, and many records consist of just one or only a few individuals. Even in Missouri, its stronghold, populations are small and highly isolated, with many not having been seen in decades. In Illinois, the species has been absent since the 1980’s, and re-introduction attempts are underway. The Arkansas population has not been observed in over thirty years. Kentucky’s population is highly imperiled, its only known sustained colony in danger of eradication from potential loss of habitat.

Swamp Metalmarks are always found in close association with native thistles, their primary larval food plants. In most locations, Swamp Thistle is considered the primary host, but at Cane Creek Canyon Nature Preserve, Sara Bright and Paulette Ogard determined that Tall Thistle is the sole host plant. To understand the life history of these butterflies, it is important to understand the life history of the plants.  Thistles are biennials—plants that complete their life cycle in two years. During their first season, they only produce an inconspicuous evergreen rosette of leaves; the tall flower stalk does not emerge until the second year of growth. Once the plants flower and seeds are set, they die back to the ground and decomposition follows. Bright and Ogard discovered that first-generation female metalmarks lay their eggs on the emerging flower stalks of second year plants. Over an eight-week period, they found caterpillars of all instars (as many as thirty-five in one day) and one chrysalis, all on these second year plants. Conversely, females from the later, second flight chose the basal rosetttes of the non-flowering, first-year plants as egg-laying sites, presumably because the majority of the subsequent larvae must over-winter and require the protection and continued food resource provided by the ground-hugging thistle leaves. In January 2012, Ogard and Bright located three mid-instar caterpillars clinging to the underside of leaves, each on a different basal rosette. Two of the three larvae were found near windowpane-shaped chew patterns characteristic of metalmark caterpillars. The marks were fresh, indicating that the caterpillars had taken advantage of warm winter temperatures to eat.

How did Swamp Metalmarks come to reside in northwest Alabama? Possibly as glaciers shrank following the last Ice Age, butterflies with the same affinities, like Little Metalmark and Georgia Satyr, remained primarily in their southern refugia, while others, like Swamp Metalmark and Mitchell’s Satyr followed the receding glaciers farther north, remaining in areas that met their similar needs.

At Cane Creek Canyon Nature Preserve, more recent activities helped create the proper habitat for Swamp Metalmarks. Beavers have long maintained an active presence, and their tree felling opened holes in the forest canopy that allowed sun-loving plants like Tall Thistle to gain a toehold.  Unlike other locales where thistle production is fire dependent, the Preserve's Swamp Metalmark habitat is a beaver-impacted wetland. After the metalmarks' presence was discovered, Cane Creek Canyon Preserve owners Jim and Faye Lacefield meticulously protected and managed the site.  However, in 2015, the area containing the largest known metalmark population flooded, totally submerging the thistles.  Since that flood, only two Swamp Metalmarks have been seen, both males.  However, Tall Thistles grow in other, less accessible places along the creek system and may also support populations of Swamp Metalmarks.  Hopefully as thistles at the known sites in the Preserve repopulate, so will the butterflies!

For more information about Swamp Metalmarks in Alabama:

Sightings in the following counties: Colbert 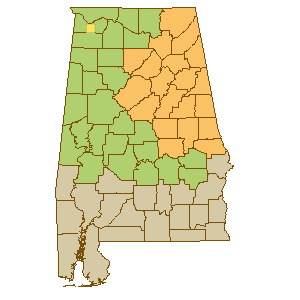 In Alabama, sunlit openings in wooded canopy near creeks. At Cane Creek Canyon Nature Preserve, beavers have long maintained an active presence.  Their tree felling opened holes in the forest canopy that allowed sun-loving plants like Tall Thistle to gain a toehold.  Unlike other locales where thistle production is fire dependent, the Preserve's Swamp Metalmark habitat is a beaver-impacted wetland.

Only Tall Thistle is documented in Alabama.