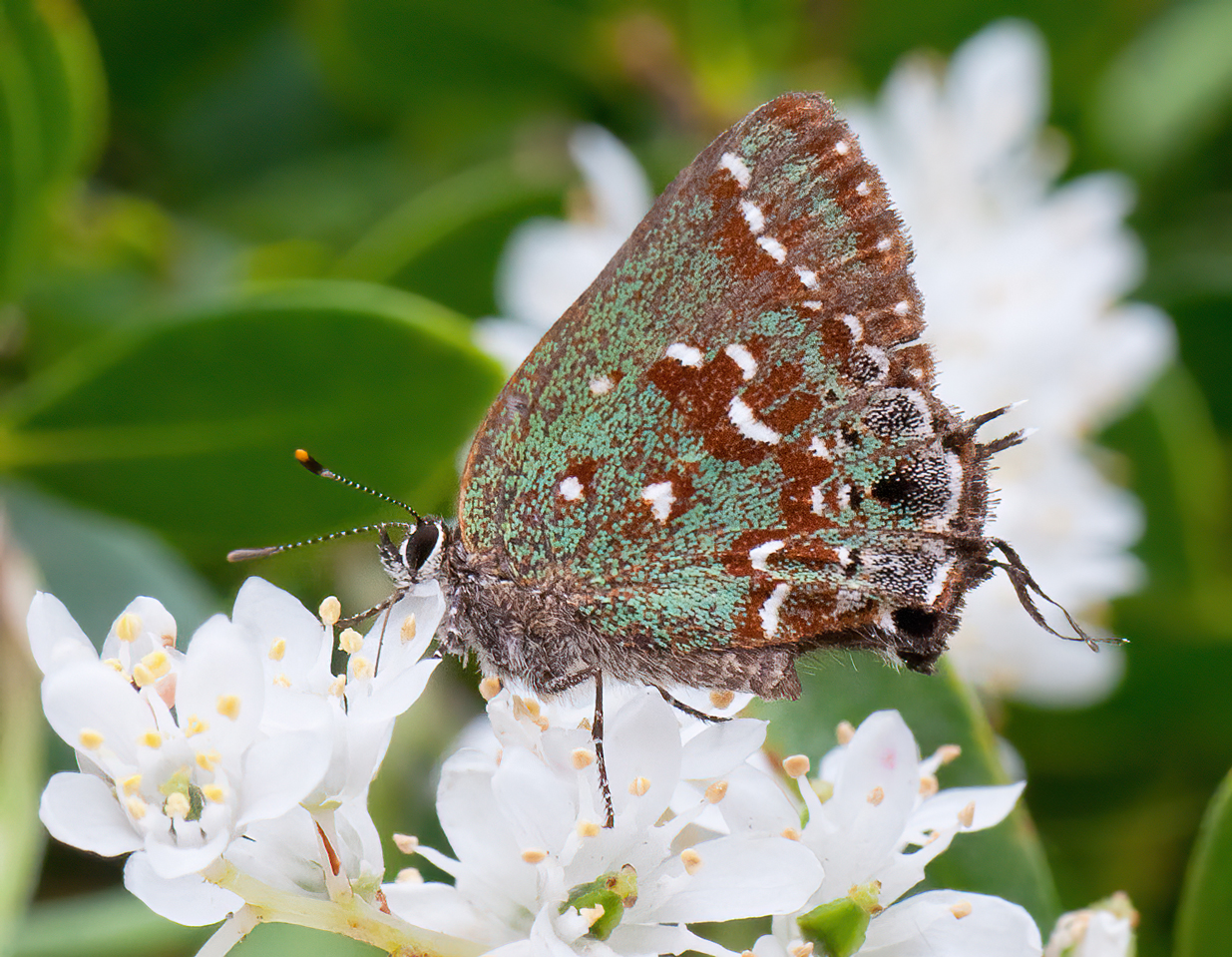 Butterfly: Wingspan: ¾ - 1 inch (2.2 - 2.5 cm).  Varying amounts of olive green scaling are on underwing surfaces.  There are two short hindwing tails.  There is a band of slightly offset white spots and a single white cell spot; the hindwing has two small white bars toward the base and an irregular white band across the middle.

Caterpillar: Green with creamy line that extends from head to tail on top.  Closely spaced white dashes are on either side of line. This pattern enables Hessel's Hairstreak caterpillars to resemble the scaly foliage of Atlantic White Cedar.

Chrysalis: Dark brown and pellet-shaped.  It is the overwintering stage.

Look for Hesssel's Hairstreaks at the tops of Atlantic White Cedar trees. Males perch high in the tallest trees and dart out to investigate anything that moves.   Since several males often perch in the same tree, movement by one often incites all the others, and swirling butterflies can be seen until they finally settle to await the next excitement. Unmated females venture to the treetops, but after mating has occurred, they sit lower in trees, away from marauding males.  Eggs are deposited on lower branches and/or small trees.  Caterpillars are highly camouflaged and look remarkably like scaly Atlantic White Cedar foliage.

Nectaring observations are scarce.   Currently, Alabama's populations are known to nectar at Black Titi (Cliftonia monophylla), a prevalent spring-blooming shrub that often grows at the base of the cedars. More observations are needed to determine what nectar sources these rare butterflies use throughout the seasons.

Hessel’s Hairstreaks were not documented in Alabama until 2010 when Sara Bright and Paulette Ogard discovered them near Seminole, Alabama and at what is now called the Perdido River Nature Preserve. The scarcity of Hessel’s Hairstreaks comes as no surprise since they absolutely require Atlantic White Cedars, and Atlantic White Cedar habitat has almost disappeared in our state. These trees were known from four counties in Alabama but have all but disappeared in most.  Their lightweight, rot-resistant wood made them an eagerly sought commodity in the past two centuries, and they were harvested almost out of existence. Fortunately, the Perdido River Nature Preserve, a Nature Conservancy holding in Baldwin County, has pristine Atlantic White Cedar habitat and supports a healthy population of Hessel's Hairstreaks. These rare butterflies are rare because their habitat is rare, and should be searched for wherever Atlantic White Cedars still grow.

For more information about Hessel's Hairstreaks in Alabama: 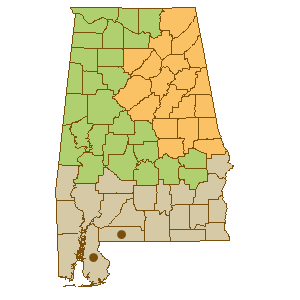 Nectaring observations are scarce.   Currently, Alabama's populations are known to nectar at Black Titi (Cliftonia monophylla), a prevalent spring-blooming shrub that often grows at the base of the cedars. More observations are needed to determine what nectar sources these rare butterflies use throughout the seasons.

Atlantic White Cedar (Chamaecyparis thyoides) is the only known host throughout Hessel's Haistreak's range and has been verified in Alabama.