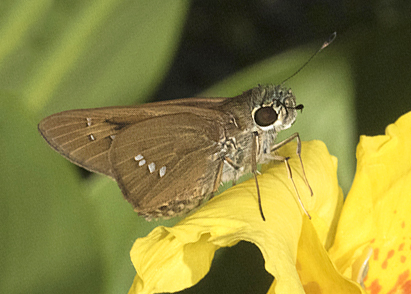 Egg:  Brazilian Skipper females lay their pale green eggs singly on the upper portion of the leaves of the host plant (Canna spp.).

Caterpillar: The head is orange with black spots. The caterpillar is usually greenish gray becoming darker green as it eats fresh undigested leaves. This caterpillar is is distinct. Its skin is so transparent that its circulatory system is visible.

Young larvae cut two slits into the edge of a leaf, fold over that portion to form a flap, and secure it with silk to form a shelter.  Larger, more mature caterpillars roll an entire leaf and tie it together with strands of silk. This creates a tubular retreat in which the caterpillar rests/hides during much of the day. The caterpillar leaves the security of its shelter at night to feed on the leaf portion along the top of its shelter.

Chrysalis: The caterpillar pupates within its leaf shelter. The slender chrysalis is green and covered with a powdery white substance. It has a long tongue case that projects beyond the tip of the abdomen.

Most people who encounter Brazilian Skippers find their caterpillars eating garden canna leaves and may never see the adult butterfly.  This is partly due to the fact that these large skippers are somewhat crepuscular--flying at twilight.  They are powerful aerialists whose wings make a rasping noise as they dart among stands of cannas and nectar sources.  Adults may perch momentarily on a leaf and then dart off with a fast, powerful flight.  They often return throughout the day to individual flowers along a pre-planned route. This is called traplining. Brazilian Skippers have exceptionally long tongues (proboscices) that allow them to nectar at morning glories and other long-tubed flowers.

The Brazilian Skipper is expected to occur at least in the southern half of the state. Its northern range is yet to be determined. In the U. S., the Brazilian Skipper is a year-round resident of south Florida and south Texas.  It is basically a subtropical to tropical species extending into Mexico, the West Indies, Central America and South America.  However, under favorable conditions, it strays north and colonizes California, southern Nevada, southern Utah, Nebraska, northern Illinois, Ohio, New York, as well as the Atlantic and Gulf coastal states. 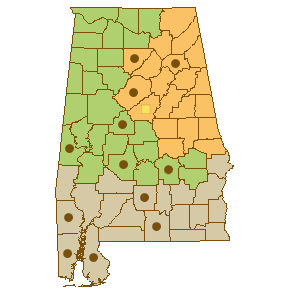 The Brazilian Skipper is often found in suburban gardens where Garden Cannas are planted as ornamentals. It also occurs in wetland areas where its native hosts grow.

In Alabama, we have documented that Brazilian Skipper larvae feed on Bandana of the Everglades/Golden Canna (Canna flaccida), a native canna species as well as Alligatorflag (Thalia geniculata) and Powdery Alligatorflag (T. dealbata), which are native members of the Arrowroot family.  They have also been frequently documented on Garden Canna (Canna x generalis), a horticultural introduction.

Elsewhere, Indian Shot (Canna indica) has also been documented as a host. .

Consider including Garden Cannas in your garden to attract Brazilian Skippers. The native hosts mentioned above make attractive additions to ornamental ponds.