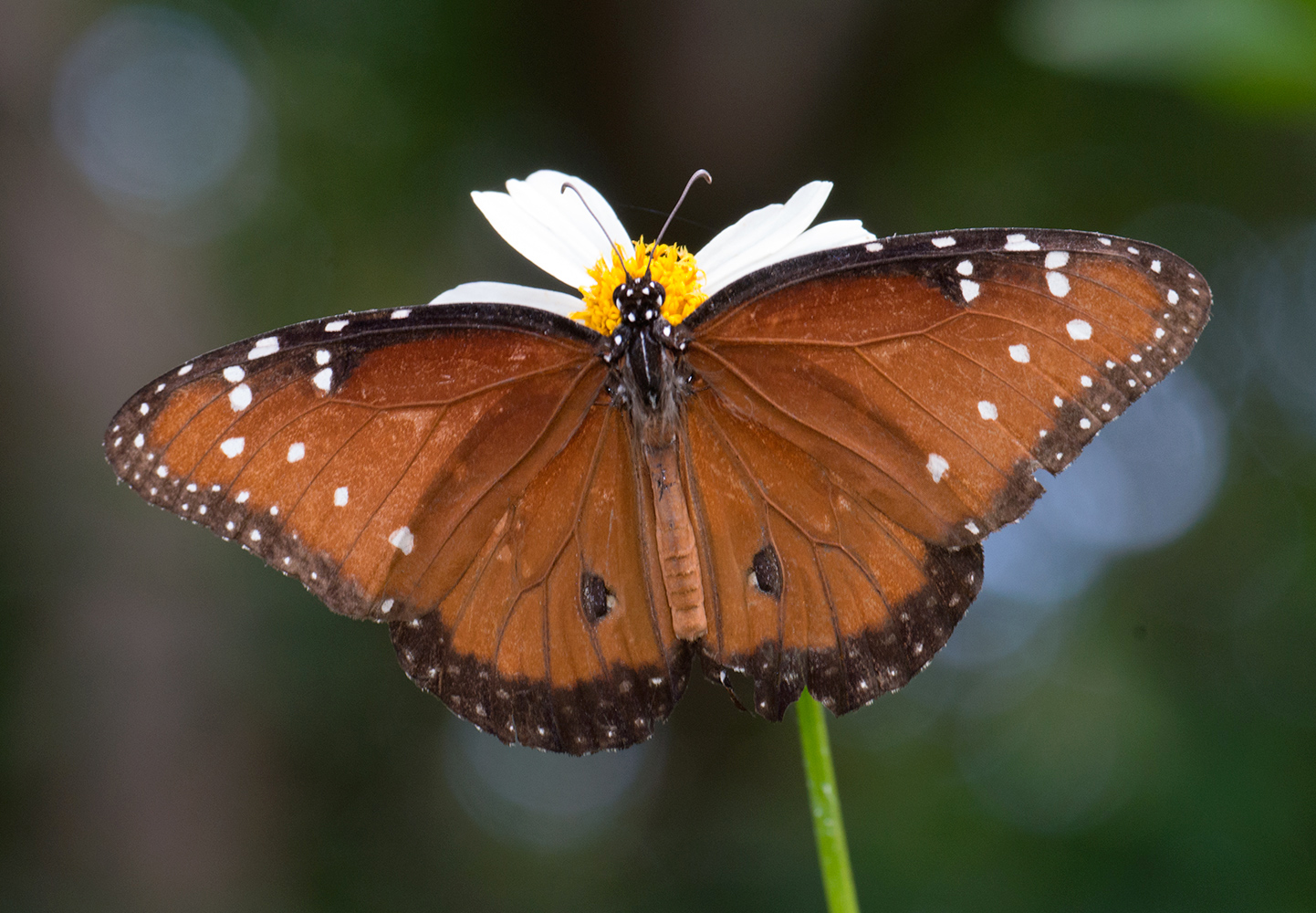 ID Tip: Mahogany in color. White spots extend past the border and into the forewings.

Egg: White and round.  Laid singly on host plant.

Caterpillar: Black with creamy white rings and yellow spots--warning colors that signal predators that this caterpillar is distasteful.  There are three pairs of long, black filaments.  (Monarch caterpillars only have two pairs).

Queens are year-round residents only in the Deep South, moving up the coast as warm weather and host-plant distribution permit.  In Alabama, they are uncommon summer and fall residents, seldom venturing past coastal counties.

Like their Monarch cousins, Queens are considered to be "milkweed butterflies," and milkweeds are members of the Dogbane (Apocynaceae) family.  But Queens also use other members of the Dogbane family as their caterpillar hosts.  In Alabama, in addition to milkweed, they also eat Gulf Coast Swallow Wort.  Caterpillars safely ingest the toxic cardiac glycosides found within Dogbane family plants and retain them into adulthood. They derive some protection from vertebrate predators who find the chemicals distasteful and sickening.  Both caterpillars and butterflies advertise their bad taste with warning coloration.

Male Queens are highly specialized in the art of seduction.  Dark scent patches dot their hindwings and disperse an alluring pheromone called danaidone, which induces females to mate.  Synthesized from plants containing poisonous pyrrolizidine alkaloids (PAs), danaidone is stored in male Queens' wing patches.  In addition, male abdomens contain bristly structures called hairpencils.  By extruding these hairpencils, males access danaidone and then apply it to female antennae.  The pheromone convinces a female Queen to mate, and during the process, it is transferred into her body with the sperm packet.  Its poisonous properties are subsequently incorporated into her eggs.  Because danaidone is crucial to the courtship process, suitable habitat must contain PA-producing plants like thoroughworts, rattleboxes, heliotropes, and groundsel bushes.  Male Queens not only drink from their flowers, but also probe for PA remnants on dried stems and spent blossoms. 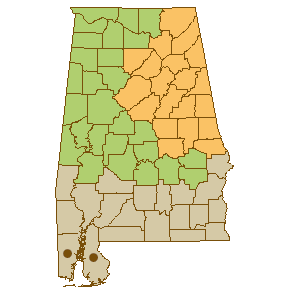 Sunny, open places, both natural and disturbed, along and near the coast.  Will visit gardens.

Milkweeds and other plants within the Dogbane (Apocynaceae) family are the sole hosts throughout the range.

Planting native milkweeds in the landscape provides larval food for Queens and Monarchs.  Nectar sources are also important, so make sure that there are late summer and fall flowers in your garden.   Because danaidone, a pheromone derived from plant chemicals, is crucial to the courtship process, suitable habitat must contain plants like thoroughworts, rattleboxes, heliotropes, and groundsel bushes that produce pyrrolizidine alkaloids (PA's).  Keep in mind that male Queens not only drink from their flowers, but also probe for PA remnants on dried stems and spent blossoms.

For more information about these PA-producing plants and Queen caterpillar host plants, click the links to the Alabama Plant Atlas provided in the Host/Nectar Plant section above.