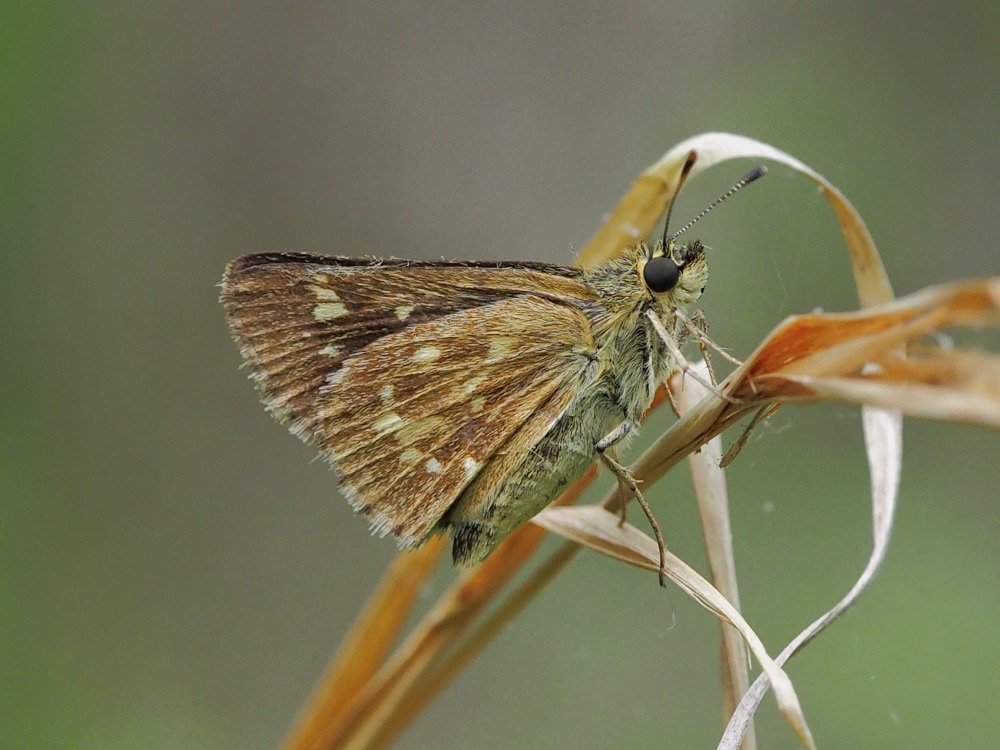 Butterfly: Wingspan: 1 - 1½ inches (2.86 - 3.5 cm). Underside is light rusty-brown with yellow veins and other pale markings; hindwing has a yellow streak in the cell and a submarginal row of small yellow spots. The wing fringes are light and not as checkered as most of the other species of Amblyscirtes.

Caterpillar: The body is whitish with a faint dark line on the back.  The head is light with a wide black line around the outer margin and a large black triangle on the face. Early instars are reported to have black heads; later instars develop their diagnostic facial pattern. The prothoracic shield is black. Caterpillars make aerial shelters of rolled leaves. A mature caterpillar silks itself onto the leaf tube, then detaches the rolled leaf from the plant so that it falls to the ground. Using tooth-like structures near its mouth, the caterpillar pulls itself and the leaf tube to a satisfactory location and lightly silks the leaf in place. It pupates, head up, within the shelter.  Larvae from the last brood of the year probably overwinter as mature caterpillars within their shelter.

Chrysalis: The head, thorax, wing case, and proboscis tube are tan while the abdomen is much paler. The chrysalis is slender and is formed with the head pointing up within the detached leaf shelter.

The Reversed Roadside-Skipper is an example of a butterfly species whose host plant is common and widespread, while it is not.   In Alabama, the species is documented in only two counties: Dekalb and Baldwin*.  Fewer than 10 individuals have been reported.

Loss of specialized wetland habitats is cause for concern when considering population dynamics of Reversed Roadside-Skippers.  The open, caney wetlands that they require have often fallen victim to draining, development, spraying, and unchecked succession.  These wetlands are typically fire-dependent, so it is no coincidence that one of Alabama's known RRS sites is at Splinter Hill Bog, which the Nature Conservancy manages with periodic, planned, rotating burns.

Reversed Roadside-Skippers are typical of the roadside-skipper genus (Amblyscirtes). Like other roadside-skippers, they are multi-brooded: in our area; there are probably three flights.  Eggs are laid singly on the host, and caterpillars make aerial nests by rolling leaf blades into tubes.  At maturity, the caterpillar silks itself into the tube, clips it from the plant, attaches it to a secure location on the ground, and pupates within it.  Fully mature caterpillars overwinter within the shelter; they pupate and emerge the following spring.  Males perch on low vegetation to wait for unmated females.  Both sexes nectar from small flowers.  It is possible that adults may be somewhat crepuscular, which could contribute to the extremely low number of sightings.

These skippers are localized and rarely encountered throughout their range.  There are disjunct populations in Georgia, the Carolinas, and Virginia as well as the Gulf Coast states of Florida, Alabama, and Mississippi. The NatureServe Global Conservation Status Rank is G3 (Vulnerable).

* Baldwin County sightings that occurred in 2018 will be reflected on the county map, sightings bar graph, and abundance calendar when the ABA is updated in early 2019. Although we do not have access to specific dates and numbers, Marc Minno discovered a few colonies of Reversed Roadside-Skippers in Baldwin County in 2001 (Rare, Declining, and Poorly Known Butterflies and Moths of Forests and Woodlands in the Eastern United States, 2011). 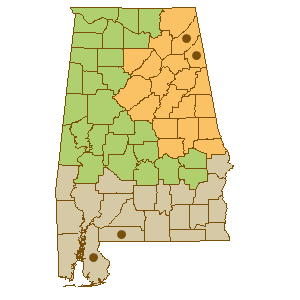 Sunny open wetlands with pinetrees; flatwoods, ditches, and edges of boggy wetlands and swamps that contain cane. These habitats are often fire-dependant.

Switch Cane is the reported host in nearby states, although other canes may also be used.

In Alabama, Switch Cane (Arundinaria tecta) is the only documented host plant.