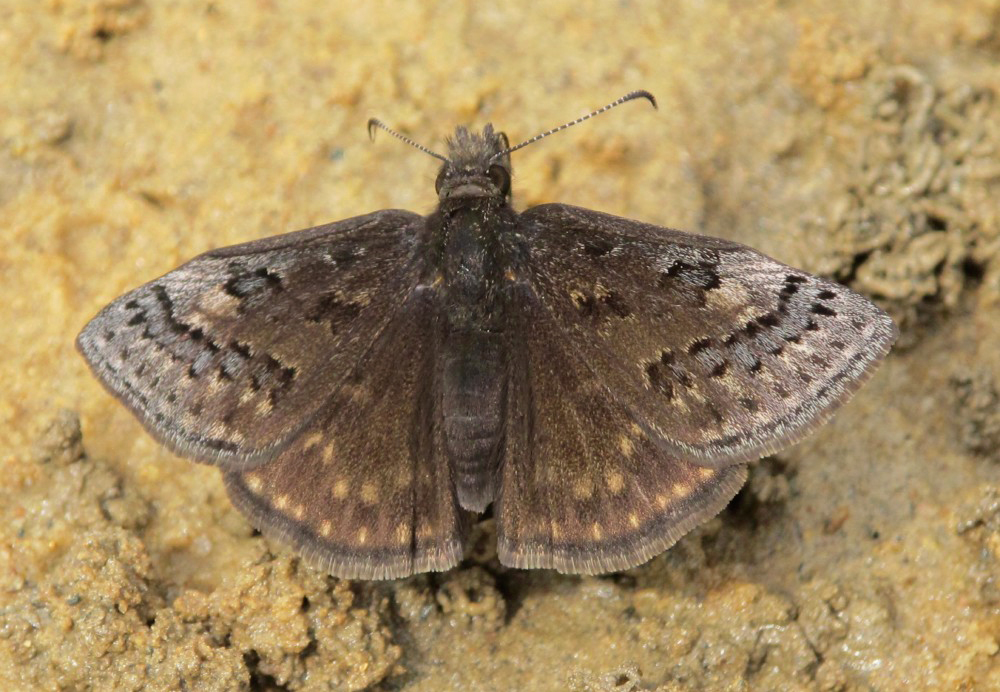 Butterfly: Wingspan: 1¼ - 1½ inches (2.8 - 4.1 cm). It is dark brown with a few black lines, grayish patches and cream-colored spots. This skipper, along with the Dreamy Duskywing, is distinct from most other duskywings in that it lacks the whitish, glassy spots near the subapical region of the forewing. It has a unique bluish-gray band that extends along the submarginal region of the outer margin of the forewing. The gray band is bordered on both sides by a row of black crescents. A marginal row of white spots is also seen in the forewing.  The female is similarly marked as the male, but is overall lighter in color. The outer wing fringe in both sexes is brown.

Egg: Sleepy Duskywings lay their green eggs singly on the leaves of the host plant.

Caterpillar: The caterpillar is light green with a yellow lateral stripe. The body is covered with short hairs and minute white tubercles. The head is brown and has a pair of bright orange dots, one along each side of the facial region. The larvae cut a rectangular fold along the edge of a leaf, roll it over, and secure it with silk threads in order to form a tubular retreat. The caterpillar remains in its retreat during the day and comes out at night to feed on the host plant leaves. The mature caterpillar overwinters in its retreat and pupates in the spring.

Chrysalis: The chrysalis varies in color from dark green to brown. The adults emerge shortly after pupation.

The Sleepy Duskywing flies in a rapid, bouncing flight near the ground.  It often lands on the ground or on low vegetation with its wings spread in a horizontal position. Males often perch on twigs and wait for females. They are territorial and, if chased away, will usually return to the same twig. Several males may often be seen near damp spots along dirt roads where they congregate in order to sip moisture and nutrients from the soil.

In Alabama, the Sleepy Duskywing has only one brood that flies from early March to early April. Therefore, in order to observe this species, one must be in the field during this short window of time.

This widespread skipper is found In the east from Manitoba south through southern Ontario and the eastern United States to central Florida, the Gulf Coast, and west to central Texas. In the west it is found  from California to Utah and southern Wyoming; south through the mountains to Arizona, New Mexico, Baja California and central Mexico. 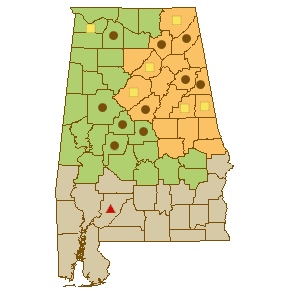 The Sleepy Duskywing is usually found in hardwood forests, scrub oak-pine communities, and scrub oak-sandhill habitats. It is usually encountered along dirt and gravel roads, trails, or edges of woods that contain oaks.

For Alabama, the host plants have not yet been identified.

In Atlantic coastal states, the Sleepy Duskywing larvae are known to eat leaves of the Bear Oak (Quercus ilicifolia) and other species of shrubby oaks when Bear Oaks are missing. Although there is no documentation yet, it likely feeds on the Turkey Oak (Quercus laevis) in Alabama, and field biologists should be on the lookouit for it larvae there. It has also been reported to feed on the leaves of the American Chestnut (Castanea dentata).