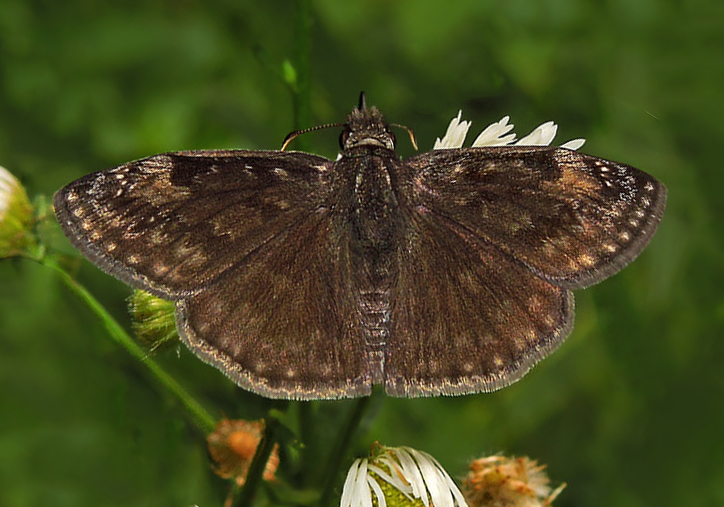 Butterfly: Wingspan: 1 - 1¾ inches (2.8 - 4.4 cm). The Zarucco Duskywing is basically brown on both upper- and lower wing surfaces, with three to five small, glassy-whitish spots at the subapical region of the upper forewing. The white spots are located just to the outside edge of a distinctive light russet-red to beige patch found at the end of the forewing cell and in the postmedial position along the outer costal edge. The Zarucco Duskywing lacks the white spot adjacent to the inside edge of the russet patch that is present in Juvenal’s Duskywing and Horace’s Duskywing. Another patch, more russet in color, is located submedially along the inner margin of the upper forewing. The whitish wing fringe along the hindwing in Alabama specimens is lighter in color than that of the forewing, which is grayish. The wings below are dark brown with numerous light and darker spots. The female is usually lighter in color than the male with larger glassy spots and more strongly patterned wings.

Caterpillar: The caterpillars are light green with a pale lateral stripe. The body is covered with numerous minute white dots. The head is brown and rimmed on either side with three large yellow-orange spots. The caterpillars construct shelters of rolled leaves tied together with silk. When not feeding, the caterpillars return to their retreat to rest. The caterpillars from the last brood in the fall overwinters. Pupation and emergence of adults appear during the following spring.

Chrysalis: The chrysalis is green to brownish with a single small dark dot on either side of the head portion that together, resemble eyes. The pupae is often formed in leaf litter.

Like most duskywings, the Zarucco Duskywing flies within a few feet of the ground and has a rapid, erratic flight. While perching and nectaring, this butterfly holds its wings open.

The Zarucco Duskywing is primarily an inhabitant of the southeastern U. S., being found from North Carolina south to the Florida Keys, and west along the Gulf coastal states to eastern Texas and Oklahoma. During favorable climates, some specimens may stray northward as far as Connecticut, Pennsylvania and southern Illinois. It is most common in the lower two-thirds of Alabama, and rare in the upper more mountainous regions, especially in northeast Alabama. 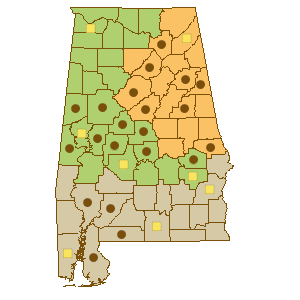 The Zarucco Duskywing is often found in hot, sandy habitats such as sandy pine forests, scrub-oak habitat, utility right-of-ways, sand dunes, roadsides, fields, and other open areas. This species is a common inhabitant of coastal regions.

In other states, larvae are also known to feed on the leaves of a wide varielty of legumes including Hairy Bush Clover (Lespedeza hirta), Carolina Indigo (Indigofera caroliniana), and vetches (Vicia spp.).

If you have a lawn in your landscape, consider letting it be natural.  The diverse assemblage of native and nonnative flowering plants and grasses typically found in naturalized lawns provides nectar and host sources for many small butterflies including Zarucco Duskywings.