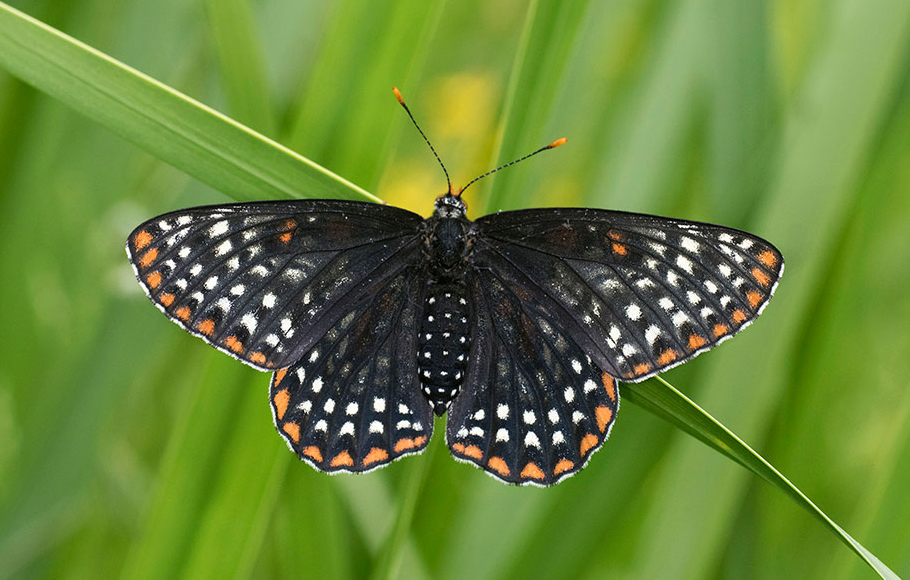 Butterfly: Wingspan: 1¾ - 2¾ inches (4.5 - 7 cm). Upperside is black with red-orange crescents on outer margins of both wings and rows of creamy white spots inward.

Egg: Yellow, soon turning reddish. The tiny, round eggs are laid in large clusters that may number several hundred.  Clusters are placed on the underside of host leaves.

Baltimore Checkerspots have only one flight each year, typically beginning in late spring/early summer.  For many years, throughout their range, turtleheads (Chelone spp.)  were the only known host plants; then Baltimore Checkerspots were discovered in dry, upland areas using false foxgloves as their caterpillar hosts.  Among taxonomists, there is debate about whether there are different subspecies(and if so, how many?) or whether these differences may constitute two different species. Until 2016, only a few extremely localized colonies of false-foxglove eaters had been documented in Alabama. Then a population of Baltimore Checkerspots was discovered on private property near Cullman that used White Turtlehead as its caterpillar host and was already flying in April--practically unheard of for this species.  In 2017, the butterflies were once again on the wing in mid-April. Alabama's Baltimore Checkerspots should be carefully observed and monitored to better understand their genetic makeup as well as their conservation needs.

Checkerspot females deposit clusters of several hundred tiny yellow eggs on the undersides of host leaves. The eggs turn red as they age.  Newly hatched larvae migrate to the tops of plants where they spin webs and feed communally.  They gradually increase the size of the web to include more and more plant material, wandering away from the nest at times, but always returning to its safety. In late summer, they stop feeding and reinforce the web.  The longtime assumption was that this became the winter nest, but the structure actually functions as a pre-hibernation site.  Most caterpillars move out of it in fall and descend into the leaf litter at the base of the plants where they overwinter.  Warmer temperatures and longer day lengths trigger a return to eating and activity, but neither host plant may have sufficient spring foliage to support the voracious appetites of the growing caterpillars.  In an unusual adaptation, many larvae finish their development on other herbaceous plants, which may also contain iridoid compounds. 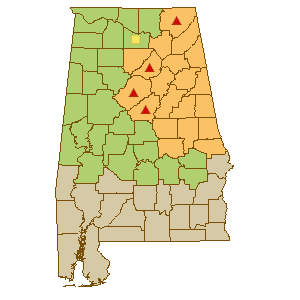