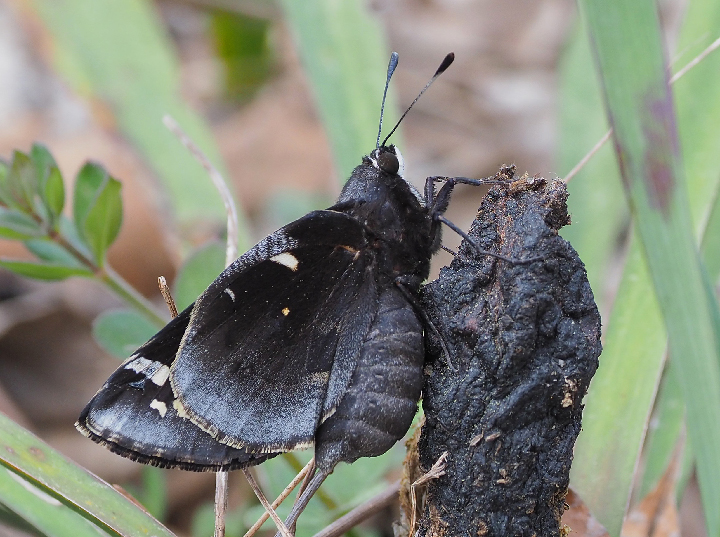 Butterfly: Wingspan: 2 - 3 inches (5.1 - 7.9 cm). This is Alabama's largest skipper. Females are somewhat larger than males. Male forewings are long and pointed. Females have wider, more rounded forewings.  Wings are brown/black. The underside (ventral) contains two rows of small white spots near the apex and a row of bright yellow spots in the submarginal-marginal regions. Females may have an extra spot band along the wing margin. The forewing above (dorsal) has a bright yellow rounded cell spot and a straight band of submarginal yellow spots near the apex. The hindwing below is black with a marginal frosting of violet-white and a bold white spot along the upper margin. The upperside of the hindwing is black with a yellow border. The antennal clubs are bent near the tip.

Chrysalis: Brownish-black. Abdomen is lighter. There is a broad, flat, bristly cremaster on the tip of the abdomen that is used to move the chrysalis up and down the burrow.  Typically a chrysalis is only seen if excavated from its tunnel.

Adult Yucca Giant-Skippers appear in early spring. With their stout bodies, stubby wings, and small heads, they resemble large moths. Their flight has been described as "hurtling," "barging," and "erratic," and an encounter with them can be somewhat startling. Males whizz through the air with whistling wings, often returning to the same perch that they left--typically within sight of the nearest yucca. Neither sex is known to take nectar from flowers, although males may sip from moist earth. Because they do not feed, females are often immobile when not involved in mating or ovipositing behaviors.  These large skippers live in isolated colonies and are rarely encountered in large numbers or far from yucca plants. There is only one generation each year.

Yucca Giant-Skippers belong to the genus Megathymus (Giant-Skippers) and exhibit many of the life history elements that are unique to the group. While first and second instar caterpillars construct shelters by eating into the thick leaves and then silking the opening, third instar caterpillars bore into the crown of the yucca plant and tunnel downward to feed on the roots. As the caterpillars eat, frass collects at the point of entry in the crown.  Eventually they construct a structure that looks somewhat like a cigar. Formed with silk and dung, it projects above the original point of entry. These shelters are typically referred to as "tents" or "chimneys." The caterpillar remains in its tunnel throughout the winter, at times crawling to the top to deposit more frass. It pupates within the tunnel in late winter or early spring.  The chrysalis eventually uses its large cremaster to move itself to the top of the larval chimney. The emergent butterfly crawls out and perches on the chimney while its wings dry and harden. The only other skipper in our area that utilizes this method of caterpillar development is the Cofaqui Giant-Skipper, a member of the same genus.

The Yucca Giant-Skipper is resident along the southern portions of North Carolina to California and south to northern Mexico. It is found in the upper two-thirds of Florida. 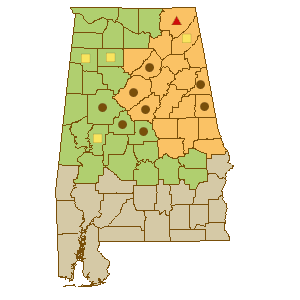 Yucca grows in a variety of habitats, and Yucca Giant-Skippers should be looked for wherever it is found. However, stands of yucca are much more common than colonies of Yucca Giant-Skipper. The exact requirements for colonization are not known, and the skippers are absent from many sites that appear to be suitable.  Yucca Giant-Skippers do not normally live near human habitations.

Yucca Giant-Skippers are not known to feed at flowers.

Various species of yucca (Yucca ssp.) are documented as host plants in other states.

Adam's Needle (Yucca filamentosa) has been documented as a host plant in Alabama. Other species of yucca may also be used.

This skipper is difficult to attract to urban and suburban gardens, although various species of its host plant may grow well.